High on the hog production

Brad Heimerl shakes his head at the idea that even some neighbors of his family’s farm in central Ohio might think that pork chops and bacon come from Kroger.

But if that’s their perception, then the 32-year-old swine production manager at Heimerl Farms figures he must be doing something right. Mainly managing the very sensitive end of the family’s various installations, as well as its contract barns in Ohio, Indiana and Illinois where, among other operations, upward of 800,000 pigs are raised in the course of a year. 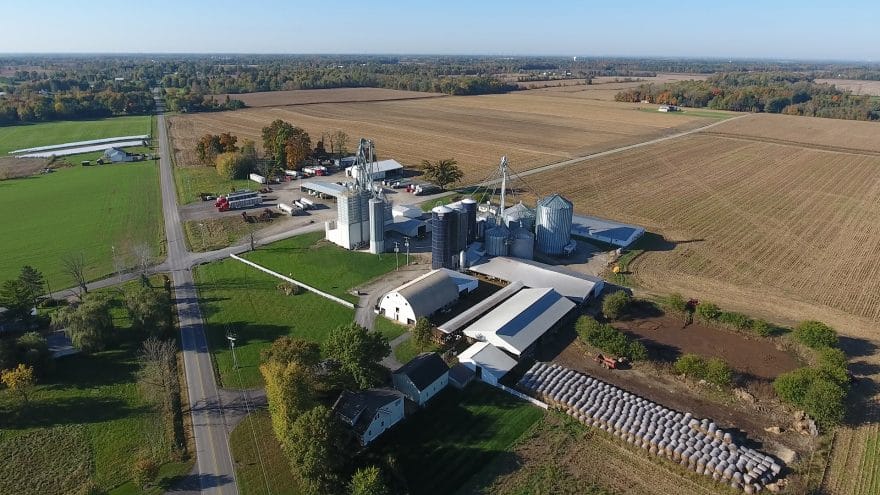 “We know that if we don’t take care of the animals, they won’t take care of us,” says Heimerl, whose parents, Jim and Kathy, founded the farm in 1975, and where his older brother, Matt, is in charge of risk management and feed mill operations, and sister-in-law Rachel helps manage the office staff. Two other siblings, Casey and Jeff, serve as chief compliance officer for the portfolio of California and farm chemical/sales specialist in Ohio, respectively.

“People may see an operation our size and assume we’re some kind of an assembly line farm. We’re not; we care about our animals and our employees, and run the farm in accordance with Christian family values,” he continues.

Reaping what they sow

That said, some kind of secular efficiency must be built into the system. Raising hogs for an international market is as high-risk as it can be high-reward, and the margin for error is small.

Contrary to their image, pigs aren’t dirty. In fact, as Heimerl reminds, the pig’s very cleanliness can be hazardous to its own health; the animal being more susceptible to any number of ailments or viruses that can decimate a herd or cause massive stillbirths among sows. Just five years ago, the highly contagious porcine epidemic diarrhea virus (PED) destroyed more than 10 percent of the roughly 63 million U.S. pigs, spiking the normally modest price of pork.

“If you were raising pigs and didn’t have PED, you did well,” Heimerl explains from the family’s main operation in the unincorporated community of Johnstown, a 20-mile drive from Columbus. “We did well, but we’d rather not face that kind of danger again.” 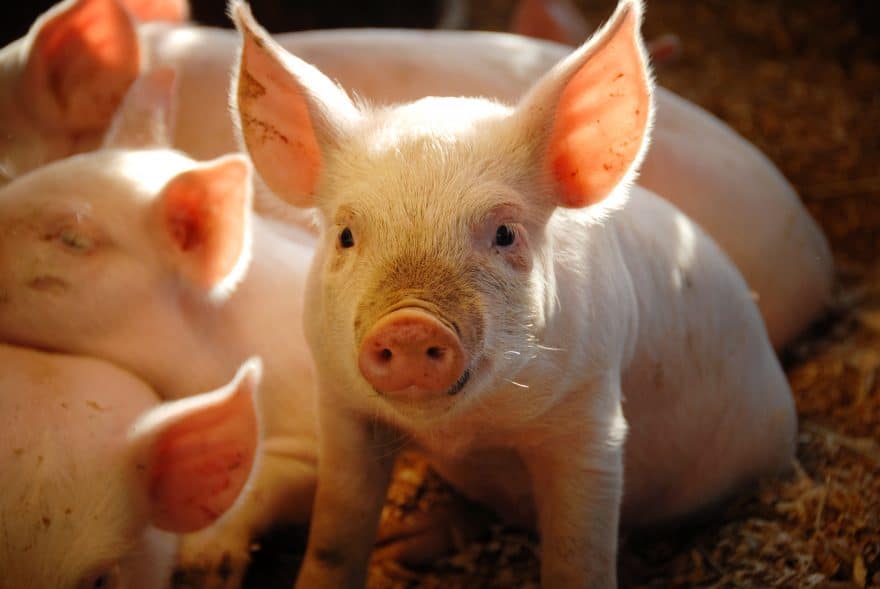 Hence the precautionary measures that represent business as usual down on the Heimerl Farms.

With viruses capable of living for a month outside a host and not easily contained, Heimerl literally tries to block any possible entrance. There’s no bigger risk than the feed itself, he warns, adding that he’s vigilant about what goes into the troughs.

“You are what you eat, whether you’re pig or person,” he says, adding that each animal has access to a balanced diet, much of which comes from some of the farm’s own soybeans and corn.

Anyone entering the enclosed areas where pigs are kept must put on sanitized garb that, like any tool or piece of equipment, stays in the unit, where it’s washed and disinfected after every use. A lagoon beneath the facility controls flies and makes for more efficient manure collection, and a full-time veterinarian watches over the pigs as well as the Holstein cattle that also make up a significant part of the Heimerl operation.

“We’re renowned for the health status of our animals and work daily to ensure it,” Heimerl states proudly.

A bigger part of the process

Heimerl Farms is involved in related operations. A few years ago it was among several pork producers to invest in the Clemens Food Group’s $255-million pork processing plant that opened late last year in the southeast Michigan city of Coldwater, providing more than just living wages for over 800 workers.

Michigan had been home to numerous such operations, but in 1998 it lost its last major meat processor when Thorn Apple Valley shuttered a venerable Detroit slaughterhouse, eliminating 1,000 jobs. With the state’s automotive industry having seen better days, Gov. Rick Snyder’s administration has made a priority of economic diversification, dangling incentives that elicited response from Clemens and its new partners.

“All of Michigan was really on board for this,” Heimerl says. “Food processing can be a big boost to any state’s economy. We’re proud to be part of something that will help Michigan, and it helps us too, as we won’t have to truck our hogs to slaughterhouses farther away.”

Give or take a few hundred, arranging for the transport of 15,000 hogs a week is among Heimerl’s many duties, this one involving detailed Department of Transportation compliance matters and the need for sanitary trucks.

“Prior to the livestock coming on board, you could eat off the trailer floor,” he assures.

And prior to those hogs going anywhere, he must work with federal EPA inspectors to ascertain that Heimerl Farms is indeed the good steward that it claims to be. 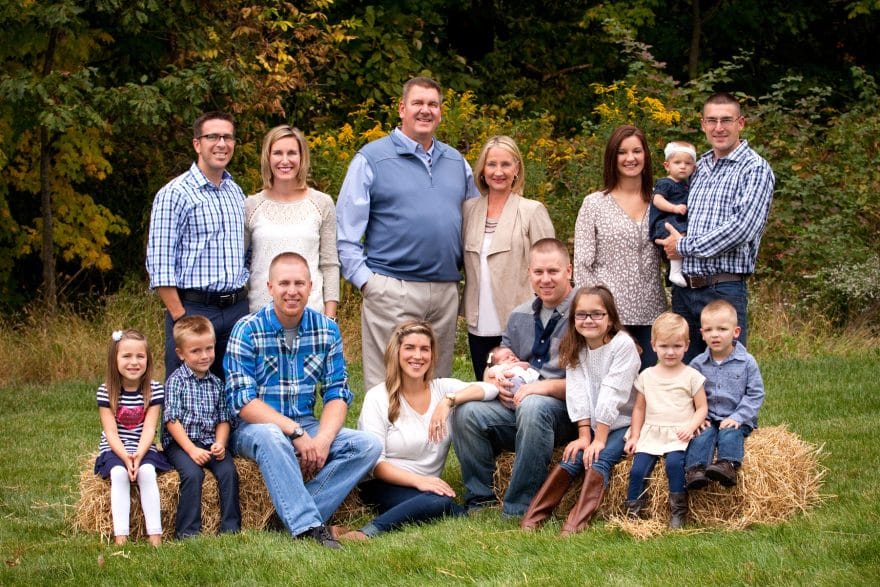 Unlike brother Matt, who studied agriculture at Ohio State University, Brad has a more unconventional background, albeit one that he says can be applied on the farm. The young man who’s been entrusted with swine management is a 2009 criminal justice graduate of Wilmington College in Wilmington, Ohio, and for nearly a decade has carried a badge as a deputy sheriff in Licking County, where Johnstown is located.

Similarities do abound, he says, in reference to the myriad rules and regulations in law enforcement and agriculture. There may be no sheriff looking over him on the farm, but his father has high expectations for everyone in his employ. The younger Heimerl doesn’t need to be reminded of the consequences of being remiss, whether he’s patrolling the rural Ohio roads or being vigilant about viruses not entering a swine enclosure.

And when performed to its highest ideals, agriculture, like law enforcement, is as much a calling as a means of livelihood. Among patriarch Jim Heimerl’s accomplishments is serving on U.S. Rep. Pat Tiberi’s Ag Advisory Council and a recent induction into the Licking County Agricultural Hall of Fame. He’s also president of the National Pork Producers Council while the matriarch, Kathy, is a past board member of the Mary E. Babcock Library in Johnstown. They already envision their grandchildren molding the farm’s future, which seems in such good hands with their sons’ involvement.

“We leave the land in much better shape than we found it,” Brad Heimerl assures.

Think about that next time you peruse the Kroger meat section. 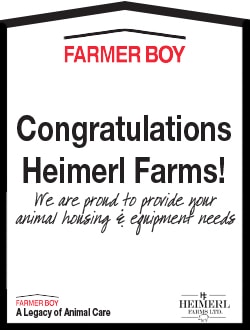