“Are we unique? Heavens no,” says Agronomy manager Chuck Peter. “Are the tools we have at our disposal unique? Definitely not.”

How, then, has StateLine Cooperative spent the last 19 years as a profitable farming coop in Northern Iowa and Southern Minnesota? Especially in light of the recession and turbulent commodities prices?

“The degree of sincerity, of confidence, of intensity that we bring to our customers and the willingness to get the job done—that’s what separates us from our competitors,” says Peter. 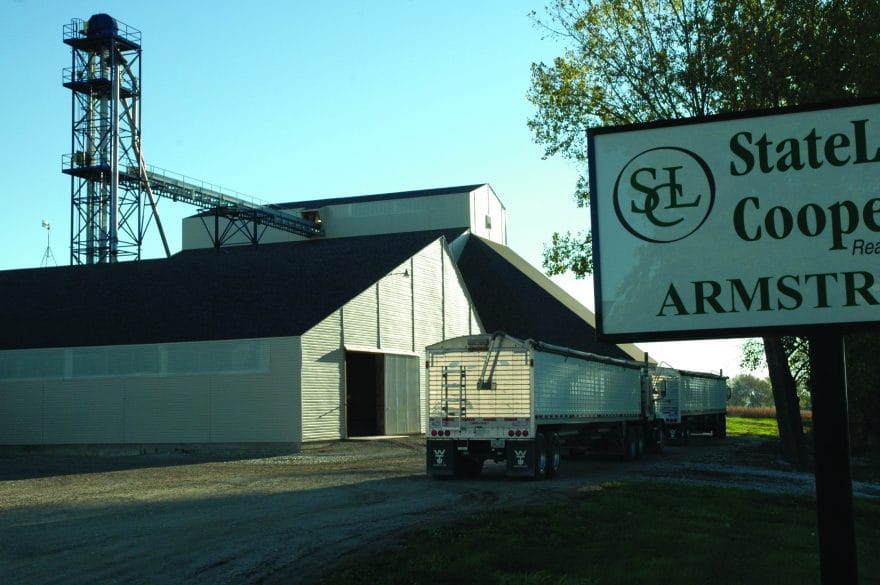 CEO Bill Beukema describes StateLine as a “very traditional” company with 16 locations throughout the region. Most of the coop’s sales are through its grain division, where it stores and sells corn and soybeans. It also runs a feed business in several of its locations, one of which includes a feed mill. Its agronomy division both supplies farmers with fertilizer, seeds, pesticides, and applies those products to their fields.

For Peter, the proof that his employees are exceptional is in the praise they get from competitors. Peter remembers asking a young man, who wasn’t local to the area, why he chose to interview with StateLine Coop for a job. The young man said he’d already visited the coop’s competitors and they all said StateLine was hard to beat.

Similarly, Peter recalls a time when a sales rep for one of the coop’s vendors called and began asking questions about one of StateLine’s younger sales people named Jake, angling to hire Jake to his own company.

“We had to tell them to leave Jake alone,” says Peter.

Peter says employees are so important that he notifies customers when, for instance, a sales person retires and another is hired in his or her place. He says that in a small, rural community, the best way to build a reputation is to foster close connections between employees—in all facets of the business—and customers.

“Our goal is to have a customer know who is in their field and who is doing their billing,” says Peter.

This philosophy extends to StateLine’s advertising. Peter says the coop has employees from all departments do radio ads in the spring, so that customers hear the same voices over the airwaves that they hear in their fields.

“You want to know that Jay, who’s been here 20 years, is still making sales recommendations and Phil is going to spread your fertilizer and Heather’s going to handle your billing and if there’s a problem, Steve is going to be there to handle it.”

But great employees can be hard to recruit in an industry that thrives in isolated towns and requires long hours.

“You look for the best people and people who don’t mind living in small town America and that’s not always easy to find,” says Peter.

“My goal is to hire people a lot smarter and more knowledgeable than myself because that makes my job easier.”

One of the ways StateLine retains its employees is by “sharing the credit” among its entire staff. When vendors bring thank you gifts like expensive baseball tickets, those perks don’t just go to the executives and managers. Peter says that too often truck drivers and skid load operators and employees working at the grain elevators are overlooked when perks are handed out.

“Heaven forbid anybody gives a book keeper anything,” says Peter.

So Peter did just that, sending four bookkeepers to a Minnesota Twins game with the equivalent of first class tickets. The bookkeepers were treated to valet parking,  a buffet, and the best seats in the house. “You’re close enough you can talk to [player] Joe Mauer while people wait on you,” he says.

For senior management, CEO Bill Beukema is flexible and encourages them to work from home, at least one day a week, whenever possible—a unique policy in the world of production agriculture.

The other challenge facing this and other coops is time, or specifically, aging.

As many of the coop’s older, veteran employees reach retirement age, Beukema and Peter must look to a younger generation with a different work ethic and values to fill their positions.

“[Younger employees] don’t just do things because you tell them to,” says Peter. “They challenge things. Their personal time is very important to them.”

Peter says this shift in employees has made him look at his industry, not just StateLine, with fresh eyes and reminded him of how hard it can be for young families in agriculture to balance personal needs with business needs.

At a previous job, Peter managed a truck driver who had worked three Sundays in a row. The driver asked to have a Sunday off to help his wife with their newborn baby so Peter offered to drive the truck in his place.

“A few day’s later [the driver’s] wife came up to me with tears in her eyes, thanking me,” says Peter. She’d been handling all of the tasks at home as well as taking care of their infant by herself for weeks and was overjoyed to spend a day with her husband. “It made me think a lot more about what the young families in our business go through,” says Peter.

As a result, he said he tries hard to accommodate employees and balance the demands he places on them by adapting to their schedules. “I don’t hold a whole lot of meetings,” he says. “If I need to talk, I go to the employees because why should their schedule fit mine? They’re the ones who are on point with the customer.”

Looking ahead, Peter says phasing younger employees into key positions will require a lot of training and guidance, but that taking the time to hire the right people and train them thoroughly will pay dividends in the long run.

“My goal is to hire people a lot smarter and more knowledgeable than myself because that makes my job easier,” he says.