Staying a step ahead in the New England dairy feed industry

Since 2004, Phoenix Feeds & Nutrition has grown from humble beginnings on North Street in New Haven, Vermont, to a widely recognized leader in the New England-New York dairy feed industry. Phoenix Feeds & Nutrition understands its customers’ daily struggles and knows making a living in today’s increasingly commercialized dairy business is not easy. This is why the company strives to deliver top-quality nutrition science and high-quality, custom-blended feed at a reasonable rate.

Phoenix Feeds & Nutrition is reinvesting resources in facilities, equipment and new technology to increase capacity and efficiency and better serve its customers. Today the company has 45 employees, serving customers throughout six states in New England and northern New York. 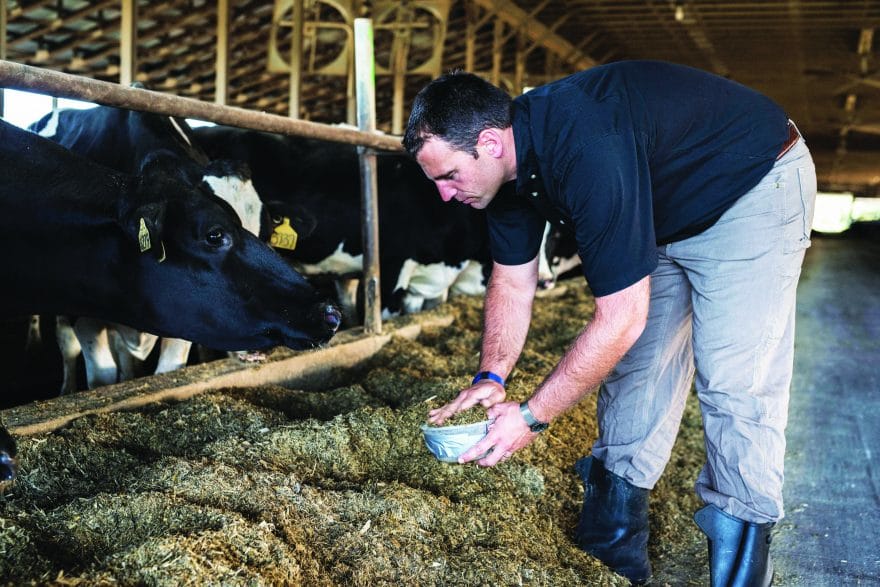 “Customer service means everything to us,” says David Santos, general manager, president and co-owner of Phoenix Feeds & Nutrition alongside Craig Newton. “In many ways, we’re directly involved with producers and their families. There’s nothing more satisfying to us than having a long-term relationships that lasts for years.”

Phoenix Feeds & Nutrition’s success is directly tied to its customers’ success. “In the agricultural industry, we are all tied to the profitability of the farmer,” explains Santos. “If the farmer is not doing well, then a lot of the ag industry is not doing well.”

Phoenix Feeds & Nutrition strives to deliver the products and services that help farmers succeed. David says there’s no one-size-fits-all solution because no two cows or farms are exactly alike. “We want to ensure that the animals we feed get the best feed and the best nutrition they can receive so that those animals are healthier, they produce cleaner, safer milk and to make sure the end consumer is getting the best product they can get,” he says.

The company has feed ingredients on hand to mill and mix to every farms’ individual diet on-site, which also minimizes cost and wait time for customers. “We only use the highest-rated ingredients in our feed, which we mix right here in Vermont,” says Santos.

Phoenix Feeds & Nutrition blends feed out of a range of commodities — soybean meal, cornmeal, canola, dried distillers grain, citrus pulp and other ingredients, but the basis of most of the company’s feed begins with simple sustenance: day-old bread. “We pick up perfectly good bread from bakeries across New England that, for whatever reason, hasn’t been packaged,” explains Santos. “We screen, process and grind it and can make unique bakery energy-feed blends for each of our customers.”

In April 2015, Phoenix Feeds & Nutrition installed a new bakery processor. “We went from being able to separate, grind and mix 20 tons a day to now, 20 tons in an hour with the new system,” says Santos. “We’ve not only increased our efficiency, we’re also making a higher-quality product.”

Phoenix Feeds & Nutrition has also made improvements to its fully automated batch plant and mixing tower. “We have completed phase 1, which involved installing 52 micro-hoppers and we installed a WEM operating system, computerizing the whole operation,” says Santos. “In phase two, we installed 16 tote bins and eight bulk mineral bins.”

Now onto phase three, Phoenix Feeds & Nutrition is currently in the final stages of installing a brand new mixing tower complete with 18 upright bins backed by a state-of-the art automation system called Mr. Feed Mill made by International Automation Company. “It will replace our current flat storage mixing system,” says Santos. “This is a big step for us with the new mixing system. We’re always trying to increase our volume and do it more efficiently so we can pass the savings onto our customers.”

“This will help us increase our capacity and meet guidelines coming from FSMA [Food Safety Modernization Act],” continues Santos. “Once complete, the new mixing tower will increase our efficiency by more than 30 percent.”

It has been nearly two years since FSMA was set into action by the Food and Drug Administration and Santos says while Phoenix Feeds & Nutrition has always been concerned with food safety, it’s more on everyone’s mind now. “These new regulations are raising the bar for feed companies to be more accountable,” he says. “It’s forced us to really look at the way we do things to set up the right procedures. Traceability is very important: in the case of a recall, we need to be able to retrace and know exactly the point of origin.”

Phoenix Feeds & Nutrition is also making great strides in sustainability with the addition of a 500-kilowatt solar array. “We’re currently in the process of putting up the solar system, which will be situated on 5 acres,” says Santos. “Once everything is in place, the power we generate goes back to the grid and we will get a credit on our utility bills. This will pay for 70 percent of our energy consumption.”

Santos says the solar system should pay for itself in about 10 years, but there are big initial benefits as well. “We expect to see the benefits right away as far as tax credits and renewable energy credits,” he says. “Vermont is really pushing the envelope in renewable energy so it made a lot of sense for us to look into it.”

The company is now looking into adding more organic and non-GMO feed to its extensive line. “In August 2015 we purchased an organic plant just down the road,” shares Santos. “We actually bought back our original site where we started. We’re going to start making organic feed because we see a viable market for it in Vermont and beyond. I think there is a lot of potential for growth in this business.”

It’s been a year of big changes for Phoenix Feeds & Nutrition. The company is pushing for improved processes and procedures, as well as staying on top of technology and putting proper infrastructure in place to further success.

“I’m the executive editor of the magazine,” adds Santos. Sharing its customers’ stories is important to Phoenix Feeds & Nutrition because, at the end of the day, it’s all about helping farmers succeed. “We’re tied to the profitability of the farmer,” says Santos.

By bringing custom capabilities that work for each unique farming operation and powering that with state-of-the-art technology and nutrition science, Phoenix Feeds & Nutrition is delivering a superior product and a neighborly business approach.