With roots tracing all the way back to 1888, Rainier Fruit Company has become one of the nation’s largest growers of organic apples, pears, cherries and blueberries. Located in the heart of Washington’s Yakima Valley — one of the country’s most productive growing regions for apples, wine grapes and hops — Rainier has leveraged the Northwest’s fertile soil into a fully integrated growing, storage and packing enterprise.

Rainer’s apple-growing operations stretch from Washington’s border with Oregon to the Canadian border while blueberries are grown primarily in the Columbia Basin. This wide growing range is necessitated by Rainier’s commitment to organic growing practices. “The horticultural knowledge we have gained through years of organic farming is applied to all products we grow,” states Mark Zirkle, president and CEO of Rainier. “Not everything everywhere can be grown organic, but applying the practices is just the right thing to do.” 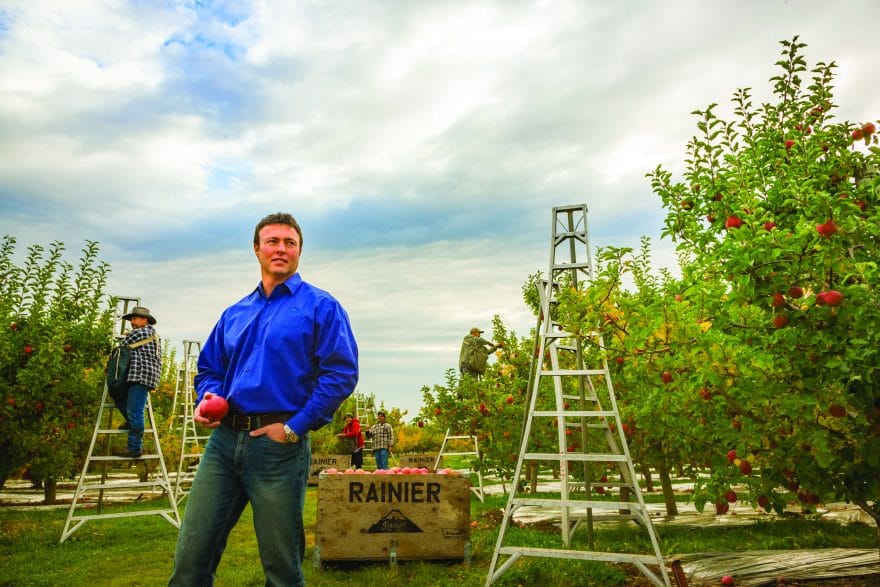 “You have to have the right varieties in the right location to be successful in organic farming,” says Andy Tudor, business development manager at Rainier. “Everyone thinks of Washington and thinks of 65 inches of rain a year, but that’s Seattle. Where we are gets 8 inches a year; it’s basically a desert climate.”

The company’s decentralized growing approach has the added benefit on ensuring that a single disastrous weather event doesn’t undo a year’s worth of planting and growing. “We are regionally diversified; in eastern Washington if we have weather events they tend to be regionalized as well,” says Tudor. “You may lose a crop from a certain ranch, but it does not put you out of business for the year.”

Rainier primarily distributes its organic produce directly to retail customers throughout North America. “By utilizing controlled atmosphere storage, we can extend our organic apple season to about 10 months. This allows us to fresh-pack apples as customers order them throughout the season,” says Zirkle.

While the Canadian market only represents 10 to 15 percent of Rainier’s total sales, the country’s dietary habits make it the perfect proving ground for the company’s produce. “It’s a very important market to us; Canadians eat more servings of produce per day than their U.S. counterparts,” says Tudor. “Every year we are increasing shipments to the Middle East and Asia as well.”

While the Zirkle family heads up Rainier, the fifth-generation, family-owned company is actually the sales and marketing arm of seven Washington fruit producers who teamed up in the 1970s to cut distribution costs.

But the seed that would grow into Rainier was planted almost 100 years before, when Zirkle’s ancestors moved to Washington from Virginia’s Shenandoah Valley and started growing apples in 1888. The family found early success growing apples in the Northwest’s amiable climate, but had to start back at square one following the Great Depression. “In the 1940s, they bought up a lot of land and that was the genesis of things,” says Zirkle, a fifth-generation member of the fruit company.

Rainier soon joined a cooperative, packing its own fruit for other companies before striking out on its own in the 60s and developing an in-house brand. The company found success in this model and steadily grew over the years to become one of the region’s largest fruit producers, but it was the arrival of Zirkle in the early 2000s that set Rainier on its current trajectory.

Zirkle grew up in Rainier’s orchards, picking apples in the fall and packing boxes during the colder winter months. He worked in nearly every part of the business before setting off for college, earning a business degree before returning to the company to relieve his father of the top position.

“When I came in 15 years ago organics were a tiny thing, but I started becoming aware of what generations value and what people wanted and it was changing,” says Zirkle. Rainier soon began experimenting with organic growing methods and was impressed with the early results.

While the organic crops meant a lower yield per acre for Rainier’s growers, the company no longer had to worry about purchasing and applying organophosphates, pesticides and other chemicals and soil additives. Most importantly, the fruit tasted better.

“The uptake of nutrients is more natural and progressive, so the fruit tends to not be as big, but the flavor and earing is better due to the way it grows,” says Tudor, who grew up on a Washington farm and cut his teeth with the U.S Department of Agriculture and another fruit marketing company before ending up at Rainier.

Rainier began to rapidly shift its production from conventional to organic; quickly learning important lessons about biodiversity, soil quality and other benefits of the organic approach. “We started putting things back in the soil that hadn’t been there with the chemicals,” says Tudor.

Organic growing is not without its drawbacks. The strict guidelines, which must be followed to ensure that every Rainier product ends up with a little USDA-certified organic sticker on the side, can be cumbersome at times.

Organic growing practices like those employed by Rainier aren’t just a trend that can be easily mastered. “You can’t just dabble is organic farming; you’ve got to commit to it, or not,” says Zirkle. “My father always said if you commit to doing something that is very difficult, it’s hard for others to follow you.”

“There are people who will come into the market trying to chase a dollar, but we made the commitment 15 years ago because we knew it was the right thing to do. We want to be the best stewards of the land possible,” he adds.

While Rainier was built on the back of familiar apple varieties such as Red Delicious and Golden Delicious, it’s the company’s Gala, Fuji and Honeycrisp lines that are driving sales today. The company has also developed two of its own proprietary strains; the Junami, brought over from Switzerland and adapted for the Northwest climate, and Lady Alice, named after Zirkle’s grandmother.

“The Lady Alice is what’s called a chance seedling,” says Tudor. “It was found in an orchard that was supposed to be growing Red Delicious, but by some chance of nature it was growing something completely different because it was pollinated by something else.” 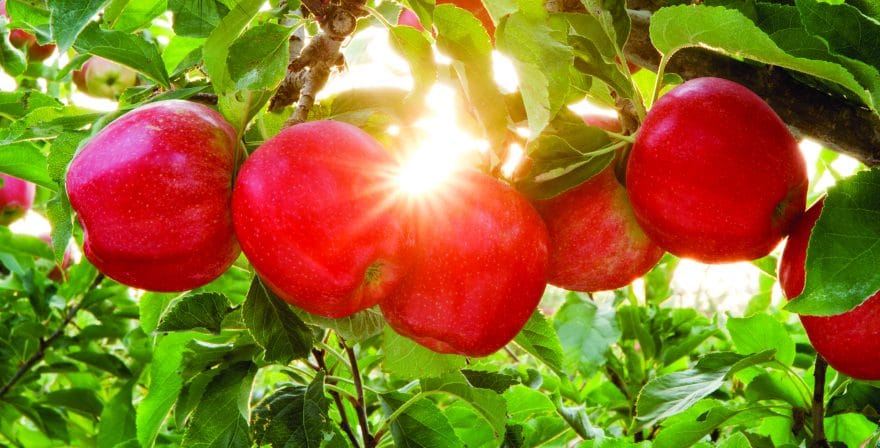 Rainier recently introduced a new organic apple packing facility. “We call it the ‘Green Line,’” says Zirkle. “The building is specially designed for production and energy efficiency. It’s the only apple packing line I know of that has over 300 solar panels on the roof to assist with power. We have another fully dedicated organic packing facility in Prosser, Washington, but our production has simply outgrown it.”

“The design of the ‘Green Line’ further allows us to fresh-pack organic apples to customers’ specifications and package requirements,” he says.

All of Rainier products are USDA -certified organic, an expensive and time consuming, but ultimately worthwhile process that guarantees the company’s products will command the highest possible price among retailers. The company went through a three-year verification process to earn the certification, which involved extensive soil and fruit testing and lower overall production. While the entire operation achieved organic certification, the team at Rainier decided to focus on embracing the process for the company’s more marketable varieties.

“We transitioned Galas, Fujis and Honeycrisp into organic, but there’s not really a financial reward for a grower to grow the older varieties organically because when you think of who’s buying organic apples generally , they’re not buying Red Delicious,” says Tudor.

Like many in the seasonal produce trade, Rainier uses the U.S. Department of Labor’s H-2A program to hire foreign workers on a temporary basis, guaranteeing that a dearth of local labor won’t leave a season’s harvest rotting on the trees.

Rainier is constantly cycling fruit in and out of production based on consumer habits, replacing 10 percent of its orchards each year to keep up with the latest trends in the produce market. Right now that means expanding the company’s line of organic products and exploring newly health-enlightened markets in Australia, Southeast Asia and the Middle East.

“There are four triggers that convert people to organics: health scares, more affluence, the birth of a child and education on organics,” says Tudor. “The more the consumer learns about organics versus non-organics, the more interested they are.”

The company is currently struggling to meet consumer demand for its organics products as the entire category continues to explode. “It’s growing worldwide; we’ve seen double digit growth in retail for organics for every year except 2009,” Tudor says.

Rainier is eager to meet the demands precipitated by the growing organics sector, but is also mindful of not letting quality slip along the way. “We go through over 30 audits a year from the farm level, food safety and ethical sourcing,” Tudor says. “As the requirements get even more stringent, we employ a fully staffed food safety department.”

For Zirkle, success is measured simply in what falls from the tree or bush. “Our goal is to grow the best fruit for our customers, but what separates us is our willingness to make change; if there’s an apple that doesn’t sell or people don’t like it, we’ll get rid of it and try another,” he says.

As one of the Yakima Valley’s leading fruit producers, Rainier plays an active role in the community, running a year-round toy drive for Toys for Tots that saw 1,400 donated this year alone.

Rainier Fruit also recently announced the start of a multiyear relationship with the Boston Athletic Association as an official sponsor of the Boston Marathon. “We couldn’t be more excited about this new opportunity to introduce the exceptional quality and sweet flavor of our apples while supporting the running community,” says Zirkle. “This is part of our long-term commitment to providing healthy and nutritious fruit products to people around the world.”

As part of the new relationship, the 500,000-plus runners and spectators at the Boston Marathon will be able to sample Rainier’s “Rising Star” apples — including Lady Alice, Jazz and Pink Lady — at kiosks throughout the racing route. In future years, Rainier will work with regional and national retailers to develop in-store promotions highlighting the partnership as well as introducing new tools and resources for health-conscious consumers.

“Runners live everywhere and we love how they embrace athletic lifestyles, which include both diet and exercise,” says Zirkle. “We believe our high-quality fruits like apples, pears, cherries and blueberries work perfectly with a balanced healthy diet.”

With over 100 years in the industry and a strong presence in one of the country’s most fertile fruit producing regions, Rainier Fruit Company will remain an industry leader while pushing the envelope to introduction organic produce to a new generation of consumers.