An expanded presence in dairy processing in the Southwest

Founded in 2009 by dairy industry veterans Mark Boytim and Steve Cooper, Continental Dairy Facilities LLC (CDF) is a dairy processing company with facilities in both Michigan and Texas. As a member of the country’s fifth-largest dairy cooperative, Select Milk Producers, CDF processes produ

Located at a 270,000-square-foot former General Motors plant in Coopersville, Michigan, CDF’s first facility could process 4 million pounds of milk per day. While this one facility helped CDF quickly carve out a niche in the market and grow into one of the nation’s premier commodity producers, it’s a new Texas plant that will drive growth in the future.

Located at a 270,000-square-foot former General Motors plant in Coopersville, Michigan, CDF’s first facility could process 4 million pounds of milk per day. While this one facility helped CDF quickly carve out a niche in the market and grow into one of the nation’s premier commodity producers, it’s a new Texas plant that will drive growth in the future. 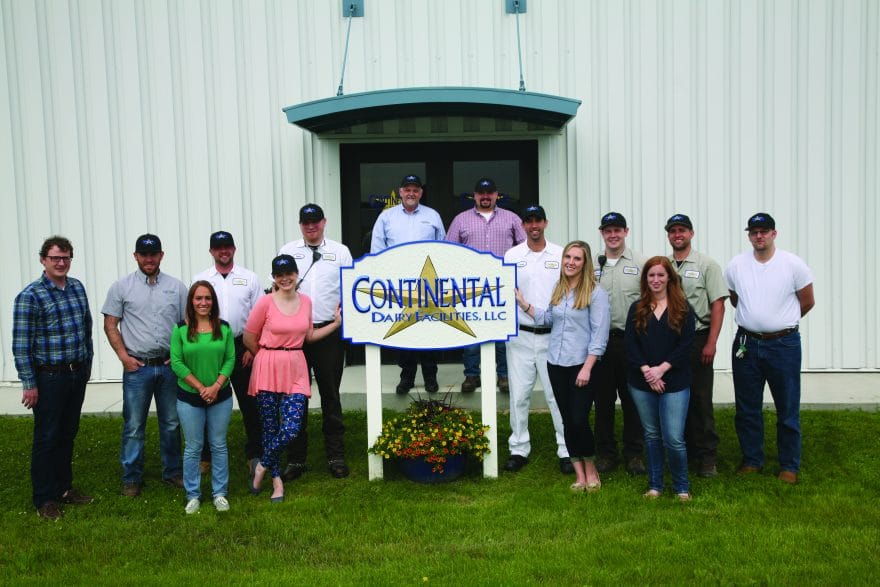 Millenials in Leadership Roles with COO and DOO

The new plant, located in Littlefield, Texas, will be able to process 4 million pounds of milk per day and will allow CDF to increase its overall capacity.

“It’s a natural transition. If you look at where milk production continues to grow it’s in the Midwest and Southwest,” says Chloe Pakalnis, project coordinator at CDF. “The members of our co-op are known as trendsetters, so it was seen that we needed a plant down there.”

The new Texas facility will mirror the current Coopersville plant, though on a slightly larger scale. The plant will have a daily processing capacity of 4 million pounds of milk and will be managed by an experienced team of dairy industry professionals. “The existing core management team  will be overseeing both plants and we have a lot of good people up here in Michigan that have stepped into leadership roles,” says Pakalnis.

Unlike CDF’s Coopersville facility, the Texas plant will feature a butter making facility from Day One. CDF is also nearing completion of an add-on butter processing facility at its Michigan facility, increasing the company’s ability to churn out a wider slate of products.

While CDF has previously been focused on developing its skim milk powder production capacity, a confluence of market forces led the commodity producer to put an increased focus on the international export market in recent years.

“The export market has really taken off and we’re focused heavily there,” says Pakalnis. CDF has exported to as many as 13 different countries including China, Vietnam, Egypt, Jordan and South Korea and is the only approved U.S. supplier of dairy ingredients to Italian chocolatier Ferrero SpA, producer of Ferrero Rocher and Kinder products. When the export market dried up in early 2015, the company switched back to a more domestic customer base.

CDF’s push into the export market earned the company statewide acclaim as Michigan’s Exporter of the Year in 2014, with over 70 percent of its sales coming from international business. “As the export market changed again we went back to doing more domestic sales,” she says.

The company has been running between 95 and 120 percent of full capacity for the last few years thanks largely to robust international sales and a growing U.S. market.

The company has added more than a dozen employees in the last two years and the payroll will continue to grow as the new Texas facility comes online. These facilities are largely automated, allowing CDF to reduce the overall number of employees, but they simultaneously increase the need for a younger, more digitally literate workforce.

“Steve has come to realize that millennials are so technologically savvy and he says it’s great because the plant is so automated,” she says. “It’s helpful to have millennials who can understand the automation a lot more quickly sometimes they get a bad rap, but they are some of our most dedicated workers.”

There are many ways to measure success at a company like CDF. While it’s left a distinct impression on the international market and steadily expanded its presence across the U.S., Pakalnis says that CDF’s reputation in its own hometown is one of the biggest points of pride for the management team.

“Coopersville was hit really hard by the automotive downturn and [the facility] was a Delphi plant beforehand, so the community was very skeptical of us,” she says. “We actually had to go into closed city council meetings to reassure them that we mean what we say and are not going to leave in two years down the line and leave them with a lot of debt.”

CDF worked hard to become an involved, valuable member of the community in ways beyond simply job creation, but also assisting in the development of community block grants for a wastewater facility and supporting various nonprofits in the area. “That helps to show our organization has a face to it and has really been part of our success and our low turnover rate,” she says.

Pakalnis credits the ease of transition to the new Texas plant at least in part to CDF’s unique organizational culture, which emphasizes promoting from within and reinvesting in its workforce. “I actually started at the plant in a sanitation role during college and I stuck with the organization because if you’re not afraid to work hard they’re willing to train you and you can move up within the organization,” she says.

An easily approachable management team is another factor in the success of CDF, according to Pakalnis. “The employees know who Steve is and they have an open door policy so they are able to walk right in. Jeff Galbraith, our director of operations and Steve also never left during the commissioning of the plant, which just goes to show they are not afraid to get their hands dirty,” she says. “That’s when I realized that I want to work for a company where your general manager or your chief operations officer are there to answer your questions.”

With a strong company culture and a new plant coming online that will soon double its processing capacity, Continental Dairy Facilities LLC is poised to continue along its unprecedented growth trajectory in the dairy industry.